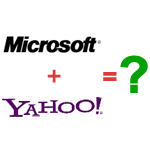 The U.S. Department of Justice and the European Commission have finally approved the Microsoft-Yahoo deal, which talks first started for back in late 2006. It is expected that at some point we will see Microsoft’s Bing search technology power Yahoo’s search results.

In a joint statement released by both companies, the integration “is expected to begin in the coming days and will involve transitioning Yahoo!’s algorithmic and paid search platforms to Microsoft, with Yahoo! becoming the exclusive relationship sales force for both companies’ premium search advertisers globally.” It was also made clear that they aim to have the integration completed in the U.S. by the end of this year, and completed globally by 2012.

This obviously forms a much more formidable rival to mount an attack on the big G. That said, the questions remains…is it too little, too late?